Thanks for waiting. In case you missed the preview, find it here, so you know what to expect. If you are not sure what Beneath the Smile is about, please check the preview out.

The project aims at looking beyond the smiles of the next person, to see what’s really beneath, what’s really going on? How people really need help and won’t bother saying anything about it but would rather cover it up with a façade of strength, with a smile.
It’s time to look beneath the smile and lend a helping hand. People are going through real things, these are their stories.

We hope that you’d be kind enough to leave a comment. Your feedback is important to us.

Today’s story was sent in by one of our readers, who has asked to stay Anonymous.

This is her story.

The ‘Beneath the Smile’ Project. 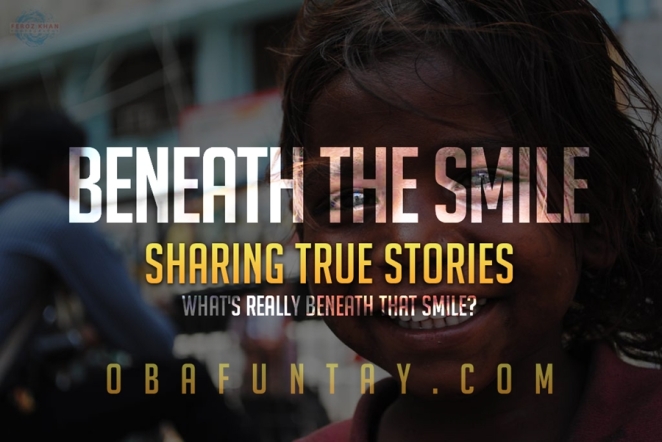 You want to know what is going on with me? Why I am shutting you out and it seems I’m being mean? Let me tell you all.

From a family that was never meant to be if my father’s mother and sister had their way… But it came to be. The first 5-7 years seemed like we were heading all the way to the top. Lovely kids, comfortable home that could contain the family of 5 and some extended family without a hitch. All of a sudden everything started going down. My dad had extra marital affairs with the consent of his mother and was going to bring in the “new wife” who was even older than him and her last born was his first born’s mate. My mother was kept in the dark by him and his family and friends till almost at last-minute when the holy spirit revealed it to her in a dream. He however got into trouble with his “new wife” with the organization he was working for that landed him in police custody and on the evening news.

From then(1998) till date, my mum became the bread-winner. She gave to her children the best she could, sent us to prestigious schools, hid my dad’s secrets from those that didn’t know by making people think he was still the bread-winner. Gave him so much money (in millions) at different times to start-up a business but he had a knack for running businesses to the ground. She then started taking care of her family both small and large including his, with her basic civil servant salary and her business my dad set up for her at the beginning of their marriage. When it seems ends might not meet she had a shop to help out. She struggled under this weight for so many years, without complaining with little or no help from my dad who even kept blaming her for everything that went wrong in his life.

As I grew up, the rose-colored glasses, a daughter looks up to her father and the world with began to clear. I wasn’t really home since I went to boarding house and was on campus through out my university days. I started to see my father for who he was and the flaws were so much that at a point I couldn’t stand to be in the same room with him and was almost always wishing for death for him. He wasn’t helping and was more of a dead weight than anything else (in my opinion) to this woman.:|

Her children… Two very brilliant and smart boys, and a lovely and almost perfect daughter as the middle child. My senior brother was as bright as they could get at age 10 on merit that made him so popular back then. Suddenly this bright kid has to repeat SS2, took him 2 yrs to enter the university, didn’t reach cut off mark for his proffered course and had to be given one to manage. In his 5yrs in school, drove 2 cars, dint have to go hungry, had everything he needed but had an extra year cos he dint do some courses only God knows why. My mother didn’t know till graduating list came out and her son’s name wasn’t there. As if that wasn’t bad enough, he almost had a second extra year but thank God my mum followed him through this extra year. She quickly did what she had to do and he graduated with a 3rd Class result.

O! You ask what he was doing with his time? “Working for God” yea… Serving in church/fellowship. He was the one they called when someone needed to be driven somewhere or somebody needed something. People used him and never really cared. But he never realised that and just thought we were against him “serving God”
Since he dint have such a good result he had almost nothing. Then one day he got tired of his life and came home and said he was fed up and wants to travel out for his masters. My ever loving-Children-first mother started running about. His 3rd class result made many agencies not want to help cos it would b hard to get a good school. He then had to go do pre-degree. My mother spent over 10-million naira around this period on him. Yup, you heard me right! 10 million not like she had it stashed o. Loans and what have you to get it all complete. Told him not to work that she would b sending money and just read and come back. However my brother went there to “serve God” and God knows what else he did with his time. He didn’t study and practically wasted the 10 million (minus feeding, housing, and all o) and had to come home now cause his visa was about to come to expire and he failed his masters program.:|

Me? I’m not the best in any way. Average student mostly through out, not such a messed up life but a little close to it. Have such a big dream that I think I am to stupid to think I can make it happen. As a girl, this is the period I should be having serious relationships and probably settling down asap. However, every guy I have met always has that lack in some very key areas of life that I cannot compromise. being hurt, cheated upon and had my hopes crushed over the years. However the one that seem to have SOME of these qualities and seems to be the only one in a while that looks like he wishes me well is the one person I’m least (if at all) attracted to. Don’t think I can date him talk more of anything else. Irony right? Lol. Call me childish, silly and what not, but there is more to that than what’s on the surface… At the moment, I almost don’t want anybody in my life sef, I just wanna be left alone.

My younger brother, about finishing university, Still believes/behaves like a child mostly. Annoyingly, a carbon copy of my father in looks, height character and attitude. Which is mostly not a good thing, cos he has a heart almost as twisted as my dad, doesn’t forgive, too know, people are put before family, spend thrift… Recently when I was away, I heard my mum was admonishing him and he walked out on her to report to my dad who then told him to walk up to her and say his mind and the two of them could have beaten her up if it came to that.

I see the struggle almost eating up my mum. I feel my mother’s pains so much probably because of the love I have for her and hate to see her suffer. Almost the only confidant she has in her life at this time. Cause my father mocks her more than half the time and complains about the allowance SHE gives him weekly and goes around telling everybody about our problems,so he is out of it. I watch her cry, I watch her struggle, I watch her try to smile trough the pain and keep praying fervently for this trying times to pass. She goes to about 3 different churches weekly, prays all the time, serves God with all she has and does all that is in her power to do for the house of God.

You say you pray for me, do you? Why does my mother have to go through these? It’s too much. It’s eating her up and this is all making me almost lose faith. I try to read the bible and keep using Job’s case as a reference point. I know Job lost it all but was the pain this much? Did he feel surrounded by parasites most times. Did he feel unloved unappreciated and used always? Was he in constant sadness that was eating him up from inside?

My mum has had two shock attacks in less than a month and has been warned that a 3rd one could be very fatal. She is not 50 yet. She swallows nothing less than 10-15 tablets per day. Her first son at over 25 is almost a failure like her husband. She has been saddled with the responsibility of catering for her deceased sister’s only child who has lived with us for as long as I can remember. Now he wants to travel abroad for his masters just as my brother did. She has to raise millions for him too. At 50, she feels she has not achieved anything and has worked in vain.

I’m numb trying to detach myself from this world, the reality of all these pain. Praying I don’t cross any line in looking for that numbness because that seems to be the only way out. Had to take drugs to put myself to sleep at times and to shut out the worry and thinking that don’t even go to rest while I sleep. That what I am going through, don’t want to imagine what she is going through.

Its getting really difficult to hold on. This is life being cruel to a very innocent and undeserving woman. Why is she suffering for sins she dint commit? Why does it seem that all she has ever worked for is crumbling down around her. I know the night gets darker before the morning but for how long? How long before we keep filling baskets with water and nothing remains. She is close to retirement and has almost nothing stashed for her old age. I won’t forgive anybody in my family if she dies. I won’t forgive even myself if I don’t take care of her. I have made up my mind that I won’t knowingly give her a reason to be sad even at the cost of my happiness.

Now you know it all, how much has “talking” helped?

A PENNY FOR YOUR THOUGHTS?

P.S: Today’s #VideoWednesday would be up by 4pm

N.B. The project goes on with Tomorrow’s ’Her Story, 28’ by an Anonymous writer.

You can still send in your own true stories to obafuntay@gmail.com

You can subscribe to the blog (at the right column to follow the project, if you are viewing with your mobile, just scroll to the end of this page to subscribe)

Letter to my unborn child, Project.

The ‘Beneath the Smile’ Project

Don’t forget to look at recent thoughts too

"A life not lived for others is not a life." — Mother Teresa